It was 1976 in Waramanga, and dad decided he wanted his own squash court

You’d never guess it from the street.

But behind the original three-bedroom brick veneer home at number 3 Adinda Street, Waramanga, is a full-size, international standard squash court, complete with Tassie Oak timber flooring and a spectator balcony at the top of a spiral staircase.

It’s believed to be one of only three homes in Canberra with its very own squash court – and when construction started on the backyard sporting venue in 1976, the neighbourhood was abuzz with excitement. 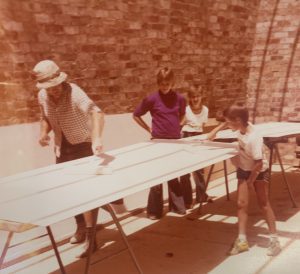 Des, Janet, Sally and Roger working on the squash court in 1978.

Roger Pfeiffer, who moved into 3 Adinda Street with his family at just six months old, was a long-haired, rowdy seven-year-old with short shorts and scabby knees when dad Des Pfeiffer secured a loan to build the squash court. The significant extension also included two additional bedrooms with ensuites and a single garage.

According to Roger, squash was a hugely popular game in Canberra in the late 1970s and – sick of waiting up to three weeks to be able to challenge his friends – dad Des thought he’d build his very own court. In the backyard.

For two years, the Pfeiffer family gathered and hand-cleaned the 30,000 second-hand bricks required for the construction of the court, including sourcing bricks from the old Canberra Technical College at Kingston, demolished in the mid-1970s.

“It was definitely a hit,” Roger recalls of the day the family squash court was ready for its first match: Mother’s Day, 1980. 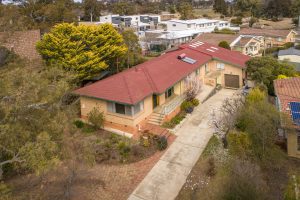 Despite having their very own squash court in the backyard, Roger was the only Pfeiffer kid to take the sport seriously, making his way to Valley Vikings Club Champion in the early 2000s. Sisters Janet, Sally and Margaret enjoyed the occasional game but, as youngsters, preferred using the court as a roller rink.

“We used to strap roller skates to our shoes and skate down the driveway and onto the court,” Roger laughs. 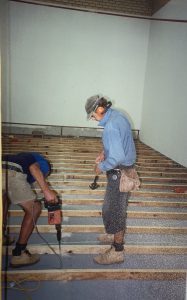 The squash court getting a new Tasmanian Oak timber floor in 2009.

“We’ve had many, many parties [on the court] over the years, it’s just a great space.”

While he’s hoping an avid squash player purchases the family home, Roger can also see the court being used as a dance studio or a gym, storage or a great space for someone who wants to work from home. 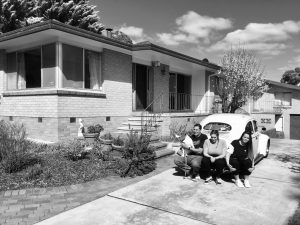 Roger Pfeiffer and his family recreated the ‘move in’ day pic. From left Roger with Molly the beagle and daughters Ellen and Greta.

“Most homes claim to have a unique floorplan but I think ours definitely wins,” Roger says of the five-bedroom home, built on a block his parents Des and Robyn purchased at auction in 1969.

“There’s the option for a big family to live here, there’s still a lot of backyard even with the squash court,” he says.

“The downstairs bedroom is accessible remotely and has its own bathroom so it’s perfect for AirBNB-ing.”

3 Adinda Street, Waramanga, will be auctioned on Saturday 12 October 2019 at 10am. View the listing here.