Meet the takeaway owner with the ultimate ‘south Canberra’ tattoo

Next time you’re ordering a big bag of potato scallops or a burger from Little Theo’s on Carleton Street, Kambah, see if you can catch a glimpse of owner Anthony Ferraro’s unusual tattoo.

The former chef turned entrepreneurial takeaway owner has an inked ‘vignette’ of sorts on his upper left arm – a tribute to his career working in hospitality and to mentors of the past.

But on the handle of one of the tattooed carving knives is a set of numbers that says everything about Anthony and his love for Kambah.

Yes, he has the iconic 2902 postcode tattooed on his arm, and he couldn’t be prouder. 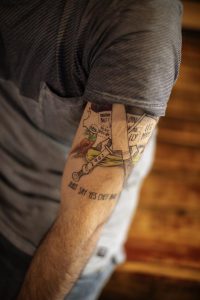 For a man who grew up in Sydney, Kambah has not only etched itself on Anthony’s skin but also in his heart. It turns out Anthony’s wife Aimee grew up in Canberra’s biggest suburb and when the couple looked to buy a business in 2015, Kambah became “the only choice”.

“Aimee grew up in Kambah and would come to the [Carleton Street] shops as a little girl – so there was always this sense of nostalgia and history, a real bond with the suburb,” Anthony explains.

“When the opportunity to buy the old Theo’s Takeaway came up, it was the only business she felt comfortable with wholeheartedly to let me do.

“I have my own deep connection to Kambah now, but mostly I love that it’s a suburb so deeply connected to Aimee and her family.” 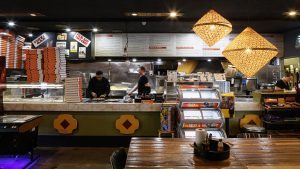 Little Theo’s was once just Theo’s, the most popular takeaway in south Canberra in the 70s and 80s. Photo: Emily Hanna, esh photography

As soon as Little Theo’s opened its doors in early 2016, the people of Kambah were all in. They fell in love with the new fit-out, the extraordinary menu and Anthony’s passion.

And in return, Anthony fell in love with cooking for the people of 2902.

“I’m addicted to interaction with people,” he says.

“I love having a yarn. Sometimes, I’ll be taking orders and start chatting and the staff will literally push me aside and go, ‘Yep! Next!’.

“The Kambah community has really embraced us, how can you not embrace them back?

“That’s my thing, my culture – in Italy, we embrace people. It’s the European way. And that’s where my joy and pleasure lies.” 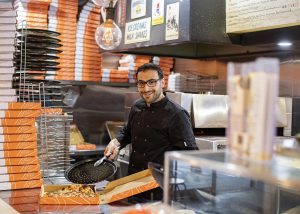 Little Theo’s isn’t your average battered sav, burger-with-the-lot kind of and takeaway (although you can get those things as well). Anthony is a born innovator and his Mooseheads hangover burger and triple-cooked potato scallops put Kambah on the map. His pizzas are legendary.

“Everything I’ve ever done, I’ve strived to be the best,” Anthony explains.

“We took on a takeaway because there was no-one really shaking things up, really wanting to do takeaway better. 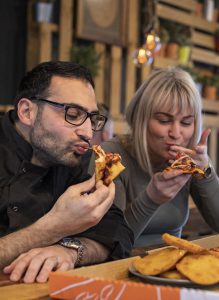 “I saw there was a gap, a need for someone to deliver at a level that I felt the customers really deserved.

“And I’m loving every day of Little Theo’s.”

This article is part of the People. Passion. Kambah series presented by Hayman Partners sales agent and Kambah specialist Lauren McDonald. If you live in Kambah and you’d like your house appraised, call Lauren on 0407 483 859 or visit her profile here.